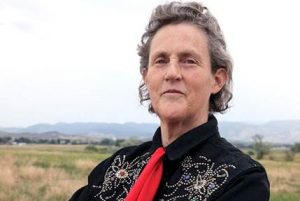 Dr. Grandin is a designer of livestock handling facilities and a Professor of Animal Science at Colorado State University. Facilities she has designed are located in the United States, Canada, Europe, Mexico, Australia, New Zealand, and other countries. In North America, almost half of the cattle are handled in a center track restrainer system that she designed for meat plants. Curved chute and race systems she has designed for cattle are used worldwide and her writings on the flight zone and other principles of grazing animal behavior have helped many people to reduce stress on their animals during handling.

She has also developed an objective scoring system for assessing handling of cattle and pigs at meat plants. This scoring system is being used by many large corporations to improve animal welfare. Other areas of research are: cattle temperament, environmental enrichment for pigs, reducing dark cutters and bruises, bull fertility, training procedures, horse perception of novel objects, and effective stunning methods for cattle and pigs at meat plants.

She obtained her B.A. at Franklin Pierce College and her M.S. in Animal Science at Arizona State University. Dr. Grandin received her Ph.D in Animal Science from the University of Illinois in 1989. Today she teaches courses on livestock behaviour and facility design at Colorado State University and consults with the livestock industry on facility design, livestock handling, and animal welfare. She has appeared on television shows such as 20/20, 48 Hours, CNN Larry King Live, PrimeTime Live, 60 Minutes, the Today Show, and many shows in other countries. She has been featured in People Magazine, the New York Times, Forbes, U.S. News and World Report, Time Magazine, the New York Times book review, and Discover magazine. In 2010, Time Magazine named her one of the 100 most influential people. Interviews with Dr. Grandin have been broadcast on National Public Radio and she has a 2010 TED Lecture titled “The World Needs ALL Kinds of Minds.” She has also authored over 400 articles in both scientific journals and livestock periodicals on animal handling, welfare, and facility design. She is the author of “Thinking in Pictures”, “Livestock Handling and Transport,” “Genetics and the Behavior of Domestic Animals,” “Guide to Working with Farm Animals,” and “Humane Livestock Handling.” Her books “Animals in Translation” and “Animals Make Us Human” were both on the New York Times best seller list. “Animals Make Us Human” was also on the Canadian best seller list. Her latest book, Calling All Minds, was a New York Times best seller for middle school students. Her life story has also been made into an HBO movie titled “Temple Grandin, staring Claire Danes,” which won seven Emmy awards and a Golden Globe. The movie shows her life as a teenager and how she started her career. In 2017, she was inducted into The Women’s Hall of Fame and in 2018 made a fellow by the American Association for the Advancement of Science. She was named as one of the top 10 Best College