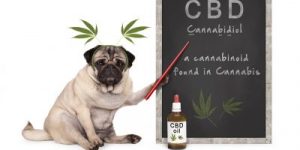 Update on Cannabis-derived and Cannabis-related Products

As the discussion of the use of cannabis-derived and -related products in veterinary medicine continues to evolve, the AVMA is providing an update for practitioners regarding the legal and regulatory framework surrounding such use. The information below is not specific to the legal or regulatory status of products of any particular company. Rather, it reflects our understanding of the current status of this class of products based on information provided by federal agencies.

CBD (and Other Cannabinoids) as Controlled Substances

The Agriculture Improvement Act (2018 Farm Bill) removed hemp, defined as “the plant Cannabis sativa L. and any part of that plant, including the seeds thereof and all derivatives, extracts, cannabinoids, isomers, acids, salts, and salts of isomers, whether growing or not, with a delta-9 tetrahydrocannabinol concentration of not more than 0.3 percent on a dry weight basis”, from the definition of ‘marihuana’ under the federal Controlled Substances Act (CSA). The Farm Bill also removed tetrahydrocannabinols included in ‘hemp’ from Schedule I under the CSA. It did not, however, change the FDA’s authority to regulate drugs and food under the federal Food, Drug, and Cosmetic Act (FDCA). As such, the FDA has the ability to work with DEA to appropriately schedule drug products, including those containing CBD and other cannabinoids. As an example, Epidiolex, which contains CBD as its active ingredient, is currently scheduled V under the CSA.

In addition, the status of CBD and other cannabinoids varies under state pharmacy laws, so we encourage veterinarians to be sure to check those prior to assuming that such products are uniformly de-scheduled at both the state and federal levels.

Under the FDCA, the compounding of an animal drug from bulk drug substances results in a ‘new animal drug’ that must comply with FDCA animal drug approval, conditional approval, or indexing requirements (sections 512, 517, and 572 of the FDCA). In addition, all animal drugs must, among other things, be made in accordance with current good manufacturing practices (cGMP, section 501(a)(2)(B) of the FDCA) and have adequate directions for use (section 502(f)(1) of the FDCA). According to 21CFR207.3(a)(4) a ‘bulk drug substance’ means any substance that is represented for use in a drug and that, when used in the manufacturing, processing, or packaging of a drug becomes an active ingredient or a finished dosage form of the drug. Incidentally, the FDA just released draft Guidance for Industry (GFI) #256 for public comment, which describes the circumstances under which the FDA, at this time, does not intend to take enforcement action for violations of the FDCA with respect to the compounding of animal drugs from bulk drug substances. None of the circumstances described in that document appear to apply to CBD.

FDA has stated that when a substance is excluded from the definition of dietary supplement under section 201(ff)(3)(B) of the FDCA, the exclusion applies unless FDA, in the agency’s discretion, has issued a regulation, after notice and comment, finding that the article would be lawful under the FDCA. To date, no such regulation has been issued for any substance.

With respect to the FDA’s approach to CBD as a ‘supplement’ for animals, FDA has concluded that animal dietary supplements are not covered by the Dietary Supplement for Health Education Act (DSHEA) and are regulated as either food or drug, also stating that, “…FDA believes it is prudent for the burden to remain, as it is now, on the manufacturer to generate safety and effectiveness data and provide it to FDA for review in feed additive petitions and new animal drug applications.”

The FDA provides further clarification on their approach to such products in the Compliance Policy Guide (CPG) on Nutritional Supplements for Companion Animals (CPG Sec 690.100), which was initially issued on October 1, 1980 and most recently revised in March 1995. For context, CPGs explain the FDA’s policy on regulatory issues related to FDA laws or regulations. They advise FDA’s field inspection and compliance staffs, as well as the industry, as to the Agency’s strategy and policies to be applied when determining industry compliance.

CPG 690.100 includes a number of pertinent statements; however, we note in particular the following:
1. “These products should not be misbranded by any direct or implied therapeutic or other claims for special benefits from their use”
2. “Further, nutritional supplements should contain no drugs or unsafe food additives, either as direct or indirect ingredients.”, and
3. The *Center for* Veterinary Medicine will not generally object to the marketing of nutritional supplements for oral administration to companion animals provided they conform to the following restrictions:
a. There is a known need for each nutrient ingredient [emphasis added] represented to be in the product for each animal for which the product is intended.”

Considering the first statement, according to the FDA, products that are intended to diagnose, cure, mitigate, treat, or prevent disease, or otherwise affect the structure or any function of the body are considered to be ‘drugs’ under the federal FDCA.

In determining whether something is a drug, ‘intent to use’ is very important and is defined by the FDA as follows, “Intended use is the objective intent of the persons legally responsible for the labeling of drugs. The intent is determined by such persons’ expressions or may be shown by the circumstances surrounding the distribution of the article.” The FDA determines a product’s ‘objective intent’ by what appears in labeling claims, advertising matter, and oral or written statements by manufacturers, sponsors, or their representatives.

A frame of reference for how the FDA evaluates ‘intent to use’ can be gleaned from a review of recent Warning Letters issued to manufacturers of cannabis products, including products intended for animals. To illustrate, in its letter to Curaleaf, FDA includes examples of what it considers to be therapeutic claims. Those examples include statements issued by the manufacturer regarding the results of research looking at the effects of administering CBD on medical conditions. In fact, it’s likely that FDA will look at all of the material referenced by a manufacturer or their surrogates (including telling veterinarians they can use the products for therapeutic purposes) in determining whether they are making therapeutic claims for these products. The consistency in FDA’s approach is evident in reviewing the 15 additional warning letters FDA recently issued regarding these products.

In addition to ‘intent to use’ and its application to determine whether a substance is a ‘drug’, CBD is an active ingredient in a drug product (Epidiolex) that has already been approved under the FDCA, 21 USC § 355. Substances for which substantial clinical investigations have been instituted and for which the existence of such investigations have been made public—and the products containing those substances—have been considered to be drugs. This has been provided as part of the FDA’s rationale for why CBD does not qualify as a human dietary supplement under DSHEA. The FDA has also indicated that a drug cannot be included in a dietary supplement and that it cannot be added to food without the food becoming adulterated.

With respect to the requirement referenced in CPG Sec 690.100 that animal nutritional supplements should also contain no ‘unsafe food additives’, by statute, any substance intentionally added to food is a food additive, and therefore subject to premarket review and approval by the FDA, unless the substance is generally recognized as safe (GRAS) by qualified experts under the conditions of its intended use, or the use of the substance is otherwise exempted from the definition of a food additive (which CBD is not). Except for three hemp seed ingredients (hulled hemp seed, hemp seed protein powder, and hemp seed oil) that have been determined to be GRAS for certain uses in human (and only human) food, no other cannabis or cannabis-derived ingredients have been the subject of a food additive petition, an evaluated GRAS notification, or have otherwise been approved for use in food by the FDA. The AAFCO, in issuing its comments related to the inclusion of hemp in animal food, has indicated that it does not believe that CBD-infused foods are eligible for the AAFCO review process, because discussions with FDA indicate that CBD products would be categorized as ‘drug’, rather than ‘food.’

According to a statement from the FDA, it is unlawful to introduce food containing added CBD into interstate commerce or to market CBD as, or in, dietary supplements, regardless of whether the substances are hemp-derived (see statement from FDA Commissioner Scott Gottlieb, M.D., on signing of the Agriculture Improvement Act [2018 Farm Bill] and the agency’s regulation of products containing cannabis and cannabis-derived compounds).

Recent FDA warning letters also address the adulteration of food by adding CBD, specifically: “Some of the products are foods to which CBD has been added. Under the FD&C Act, it is illegal to introduce into interstate commerce any human or animal food to which certain drug ingredients, such as CBD, have been added. In addition, the FDA is not aware of any basis to conclude that CBD is GRAS among qualified experts for its use in human or animal food. There also is no food additive regulation which authorizes the use of CBD as an ingredient in human food or animal food, and the agency is not aware of any other exemption from the food additive definition that would apply to CBD. CBD is therefore an unapproved food additive, and its use in human or animal food violates the FD&C Act for reasons that are independent of its status as a drug ingredient.”

While focused on the use of CBD for people, FDA recently updated its consumer-directed material.

To our knowledge, there are no long-term safety data available for the use of CBD in companion animals. Results of a very small-scale study (8 dogs, 8 cats; no animals used as controls) focusing on pharmacokinetics and safety were recently (October 19, 2019) published in Animals. The study included a preliminary safety and adverse effect assessment for dogs and cats given a 50/50% mix of CBD and CBDA at a dose of 2 mg/kg twice daily for 84 days. Serum chemistry and CBC results showed no clinically significant alterations, nor did physical examinations; however, one cat showed a persistent rise in alanine aminotransferase (ALT) above the reference range for the duration of the trial. Cats appeared to absorb and eliminate CBD differently than dogs, showing lower serum concentrations and adverse effects of excessive licking and head-shaking during oil administration (although it could not be determined if these behaviors were related to CBD or to the fish oil vehicle). Other studies of the use of CBD for epilepsy and osteoarthritis in dogs have reported increases in liver enzymes associated with the administration of CBD. Whether such elevations in liver enzymes are problematic or not is not currently known. In addition, previous studies have reported substantial inter-individual variability in serum CBD concentrations despite a consistently administered dose.

Safety data currently available are largely derived from animal models of human disease. Animal models used in those studies include rodents (rats, mice) and pigs; such studies involving dogs and cats are rare. In addition, when considering the clinical applicability of such safety studies to veterinary patients it is important to keep in mind that many are designed to explore potential toxic effects in people and, as such, use human-analogous doses, rather than doses intended for clinical use in animals.

Finally, a paper was published in 2018 (see: https://www.vetsmall.theclinics.com/article/S0195- 5616(18)30087-1/abstract) regarding increases in toxic exposures to cannabinoids in dogs and cats. While a common source of exposure was chocolate edibles containing THC, cases reported to the Pet Poison Hotline involved both accidental and intentional exposures to THC, synthetic cannabinoids, and high doses of CBD in dogs and cats.