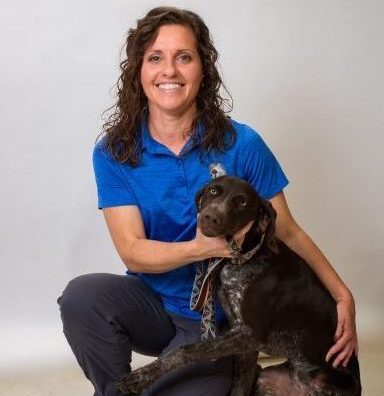 Dr. Hilary Christner – IVMA President
Dr. Hilary Christner was raised in Northeast Indiana. After graduating with her DVM at Ross University in 2006, she joined her father (Dr. Rob Bollinger) at Lagrange Veterinary clinic, where she is now the owner. Dr. Christner received her bachelor’s degree in Animal Science from Purdue University in 2003 and continues to support her alma mater by participating in programs affiliated with the university and by hosting externs at her clinic.
Dr. Christner was a participant in the inaugural class of the Power of 10 through the IVMA. Since participating in the Power of 10, she has served on several committees and participated in task force groups put together by the IVMA. She has also been active with the USDA and the State Board of Animal Health in developing guidelines for dealing with canine brucellosis, co-authoring the “Best Practices for Brucella Canis Prevention and Control in Dog Breeding Facilities” publication.
In her free time, Dr. Christner enjoys running and horseback riding with her husband Tim, and attending her children’s activities in LaGrange, Indiana. They enjoy spending time with their family on the lake during the summer. 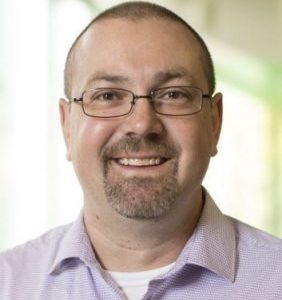 Dr. Aaron Johnson (PU’05) is a clinical research scientist at Elanco Animal Health in Greenfield, IN. He was born and raised in southeastern Connecticut before moving to Indiana to attend Purdue University. He completed his Bachelor of Science degree in animal science (’99) and a Master of Science degree in beef cattle reproductive physiology (‘01) at Purdue before graduating with his Doctor of Veterinary Medicine degree in 2005.Upon graduation from Purdue, Dr. Johnson worked as a small animal practitioner in Fishers and Westfield for 6 ½ years. Following his transition to industry, Dr. Johnson took a role in U.S. Regulatory Affairs at Elanco where he supported new drug development in R&D for both companion and food animal products. He was involved in interacting with the U.S. Food and Drug Administration Center for Veterinary Medicine (FDA-CVM) and U.S. Environmental Protection Agency (EPA) to advance projects in Elanco’s R&D pipeline, and was directly involved in the U.S. approval of  two companion animal products and one swine product. He was also involved in numerous regulatory strategy initiatives,including FDA’s compounding of veterinary pharmaceuticals, FDA’s veterinary feed directive (VFD) modernization, and EPA’s reporting of adverse events for companion animal spot-on products. Currently Dr. Johnson works as a research scientist in Elanco’s R&D organization, where he is responsible for helping identify and advance new companion animal therapeutic molecules in Elanco’s early R&D pipeline. What Dr. Johnson loves most about this role at Elanco is the opportunity to potentially benefit thousands of veterinarians and millions of pets with new therapies he is helping to discover and develop. During his 9 years at Elanco, Dr. Johnson has also continued to practice as a weekend relief veterinarian in Indianapolis, which he says helps keep him apprised of the challenges and gaps that practitioners are currently facing. Dr. Johnson served on the Executive Board of the Central Indiana Veterinary Medical Association from 2009-2013, including two terms as President in 2010 and 2012. During that time, he was chosen as Indiana’s representative for the AVMA Emerging Leaders Program at the 2012 annual AVMA leadership meeting in Schaumburg, IL. Most recently, Dr. Johnson served on the IVMA Board of Directors from 2017-2020 as the District 11 (Central Indiana) representative. Dr. Johnson currently lives in Fishers with his wife Amber and two children. Their pets include one dog, two cats, two Guinea pigs, and a hermit crab. In his spare time, Dr. Johnson enjoys home brewing, golfing, camping, and men’s and high school ministry programs at his church. 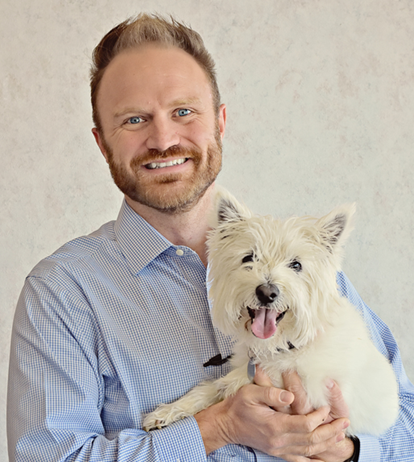 Dr. Aaron Smiley – IVMA Immediate Past President
Dr. Aaron Smiley practices small animal medicine in central Indiana. Dr. Smiley received his DVM from the University of Illinois in 2007. He leads two practices for Vetcor. He is the 2020 President for the IVMA and is on the University of Illinois Veterinary Alumni Board.
Dr. Smiley is an early adopter of telemedicine technology and has completed over 1400 cases. He is an expert on the incorporation of virtual care into practice and has lectured on the topic at national meetings. Dr. Smiley is also the co-founder of VetMed2.0, a think tank focused on discovering divergent ideas in veterinary medicine.
The company organized the first annual Hackathon at the University of Illinois and is currently developing a technology to match veterinary mentors and mentees.
He believes that IVMA has a long history of leading the veterinary profession. According to Dr. Smiley, “in 2020, IVMA will stand on our rich tradition and lead the industry toward solutions for today’s challenges.” #IVMALead2020
He lives in Noblesville with his wife, Kristen, and their four daughters. 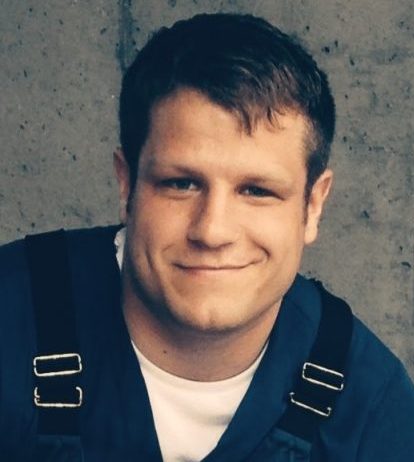 Dr. Kyle Shipman (PU’15) is the Director of Avian Health and Field Operations at the Indiana State Board of Animal Health. He completed both his undergraduate work and veterinary degree at Purdue University.
Prior to veterinary school, Dr. Shipman got his first taste of regulatory medicine when his family’s cattle herd in Southeastern Indiana was involved in a bovine Tuberculosis investigation. During veterinary school, he concurrently pursued nine additional courses through Purdue’s Veterinary Homeland Security Graduate Certificate Program to expand his knowledge of natural and intentional high-consequence threats to animal health. Despite an interest for the clinical side of veterinary medicine, Dr. Shipman identified his true passion in public health and regulatory medicine early in his professional curriculum, and immediately joined the BOAH team after graduation.
Dr. Shipman became involved with the IVMA shortly thereafter, participating in the IVMA’s Power of 10 Leadership program in 2015. Dr. Shipman has previously served as co-chair of the IVMA Membership Committee and member of the IVMA Board of Directors representing the 12th district, prior to beginning his term as IVMA’s Treasurer in 2018.
Dr. Shipman’s favorite part of his career is the scope and diversity. He says BOAH’s “clients” are the citizens of Indiana, and their “patients” include every type and size of animal living here from snake to cow to elephant. Dr. Shipman considers it a great fortune to work with a team that serves pet owners, livestock producers, dog breeders, fish farmers, food processors, law enforcement agents, human health care workers, and of course, private practicing veterinarians, just to name a handful. He looks forward to further serving Indiana’s veterinary industry as IVMA’s Treasurer. 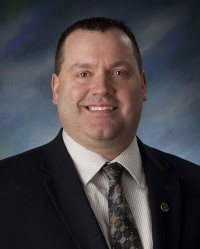 Dr. Jim Weisman (PU ‘97) is a small animal practitioner, Purdue University College of Veterinary Medicine faculty member and administrator. Dr. Weisman is from Evansville where he was born, raised, and returned to practice veterinary medicine for 11 years. He completed his undergraduate degree as well as his DVM degree at Purdue.
While at Purdue, both in his undergraduate and Veterinary School years, he was very active in student organizations and organized veterinary medicine. Dr. Weisman was a Delegate to the Student AVMA House for 2 years, and then he was elected to the national office of SAVMA Treasurer. In addition to these activities on the national level, Dr. Weisman was very involved at the Veterinary School where he was a student leader in several clubs and school committees as well as the chair of the Annual Vet School Open House. With these responsibilities, he gained a great deal of experience with organized veterinary medicine which gave him an excellent foundation for his upcoming leadership roles in the IVMA.
Dr. Weisman has been a very involved and effective leader within the IVMA over the past 20 years. He first served on the Board of Directors as a District Representative and then held the leadership positions of the IVMA leading to his year as the IVMA President in 2006. Dr. Weisman has continued to be very active since his presidency as he has chaired the Annual Meeting Planning Committee and continues to chair the Indiana Vet Med PAC. Over the past 10 years, he has served the veterinarians of Indiana as their Alternate Delegate and then Delegate to the AVMA. In this role, he has been an active House of Delegate member participating in many discussions surrounding the necessary AVMA changes which affect our profession. He has taken additional responsibilities within the AVMA by serving as a member of the Early Career Development Committee which is focused on establishing programming to meet the needs of our colleagues just entering and early in their professional careers. In addition, Dr. Weisman served on the 6-member Strategic Management Process Core Team. He was one of three members of the House of Delegates who were asked to serve on this important team which has the responsibility to lead the AMVA’s strategic planning and implementation for the next 5-7 years. He was then recruited to represent the House of Delegates on the AVMA’s Strategic Management Committee where he served for 6 years.
In addition to his services to the profession, Dr. Weisman continues to be involved in his community through his involvement with 4-H and other civic organizations. Dr. Weisman completed a Governor-appointed 4-year term as a Director of the Indiana State Fair which allows the veterinary profession to be continuously represented and integrated into decisions that impact animal wellness and care at the Indiana State Fair. At the Purdue University College of Veterinary Medicine, Dr. Weisman is the Assistant Dean for Student Affairs and is a Clinical Assistant Professor. In addition to these responsibilities he also works as an Emergency Clinician at Purdue’s Veterinary Teaching Hospital. His practice and organized veterinary medicine experiences bring a welcomed perspective to the veterinary students of the College.
Dr. Weisman believes that involvement within one’s professional society is an essential commitment to their profession. He embraces his commitment and welcomes the opportunity to further serve you, the veterinarians of Indiana, and our profession as a whole.